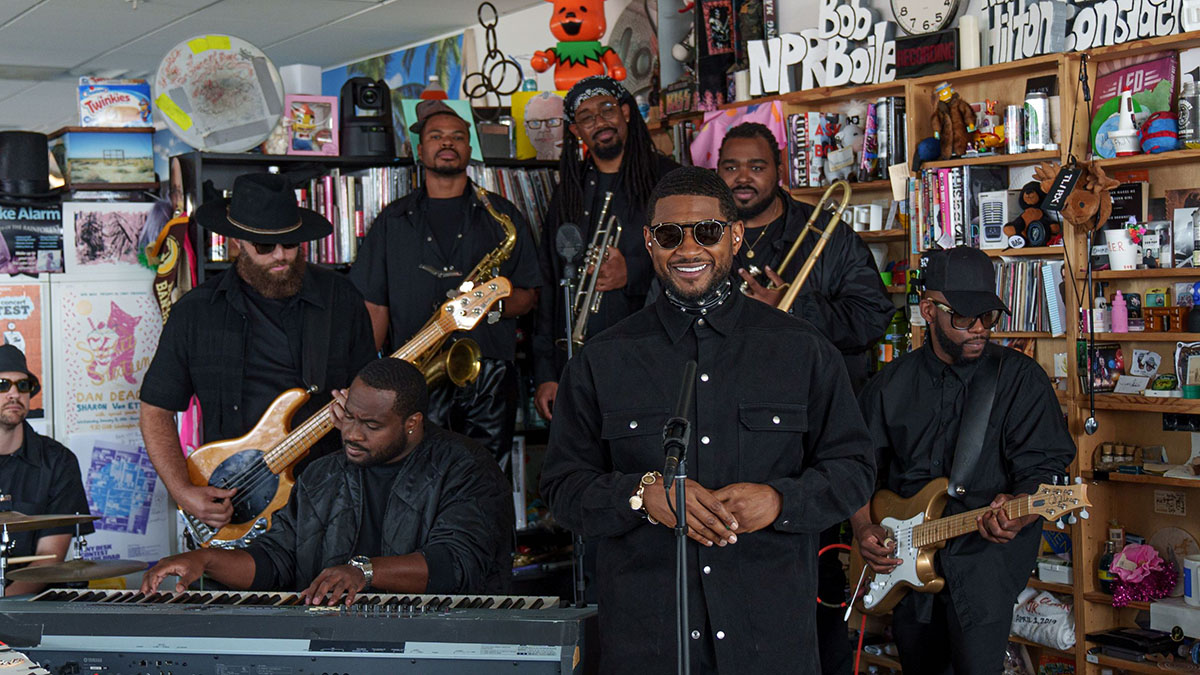 Usher paid a visit to the NPR studios for his debut ‘Tiny Desk’ concert before Black Music Month ended to honor his legendary music career. Modern R&B icons Eric Bellinger and Vedo also perform with the R&B legend as supporting vocalists. The “most magnificent voices of this period,” he said of them.

Usher begins his first Tiny Desk performance with “You Make Me Wanna,” the opening track from his sophomore album My Way, which was released in September 1997. The first note of “Superstar” from Bellinger’s diamond-certified album Confessions is then performed by him before giving the stage to Bellinger.

Usher then performed “U Don’t Have to Call,” also from the album 8701. During this song, Vedo had the chance to display his singing prowess. Later, Usher switches to “Nice & Slow.” To find out what else Usher has in store, watch the remainder of his Tiny Desk set below.

Usher and the rap group City Girls collaborated on the new single “Good Love” last Friday Friday, July 1. It will come with a music video that Daps directed.

Usher collaborated with several artists this year besides The City Girls. Usher and Mary J. Blige collaborated on the song “Need Love” in February. It can be found on Good Morning Gorgeous, her most recent album, which was released on Mary J. Blige Productions in collaboration with 300 Entertainment. They performed “Need Love” for the first time in May in Atlanta, Georgia, at night two of Mary J. Blige’s inaugural Strength of Woman Festival and Summit.

“At first, the song was just Mary. Although we had no intention of including anyone on there, J. White produced the song and, from what I can tell, at the time, he was probably working with Usher. During one of his sessions with Usher, he played it. In an interview with Rated R&B, Blige’s A&R Eddie Fourcell said, “He crushed it.

New Album On the Way?

Usher hinted that his own new album would be out this year. He explained to People’s Mark Gray how the recent global shutdown changed the course of his much-anticipated follow-up to 2016’s Hard II Love.

“In COVID, while we have been in quarantine, my ideas changed. I actually learned new things. I was able to really be reflective and find out what things matter and really have some true, honest, deep conversations with people and myself, to take some ownership of some of where my life has gone and some of the things that I’ve come through. It is honest.” expressed Usher.

Usher begins the second phase of his Las Vegas residency at Dolby Live at Park MGM on July 15. Through October 29, there will be a concert. Tickets are currently on sale for the revised dates.

With the reissues of vintage albums like 8701 and, most recently, Looking 4 Myself, Rated R&B has recognized Usher. Keithan Samuels of Rated R&B chatted with Rico Love, Luke Steele, Pierre Medor, Ron “Flippa” Colson, and others to get their thoughts on his seventh studio album.

“I enjoyed it all because it was so dangerous. When it comes to attempting new things, I’m a genuine risk-taker, Bellinger told Rated R&B.

Usher has put out a number of tracks over the past few years, including the number-one singles “Bad Habits” and “Don’t Waste My Time” with Ella Mai, as well as “SexBeat” with Lil Jon and Ludacris. He also worked with Jam & Lewis on the song “Do It Yourself,” which was featured on their self-titled album.

In this article:Usher
Up Next: