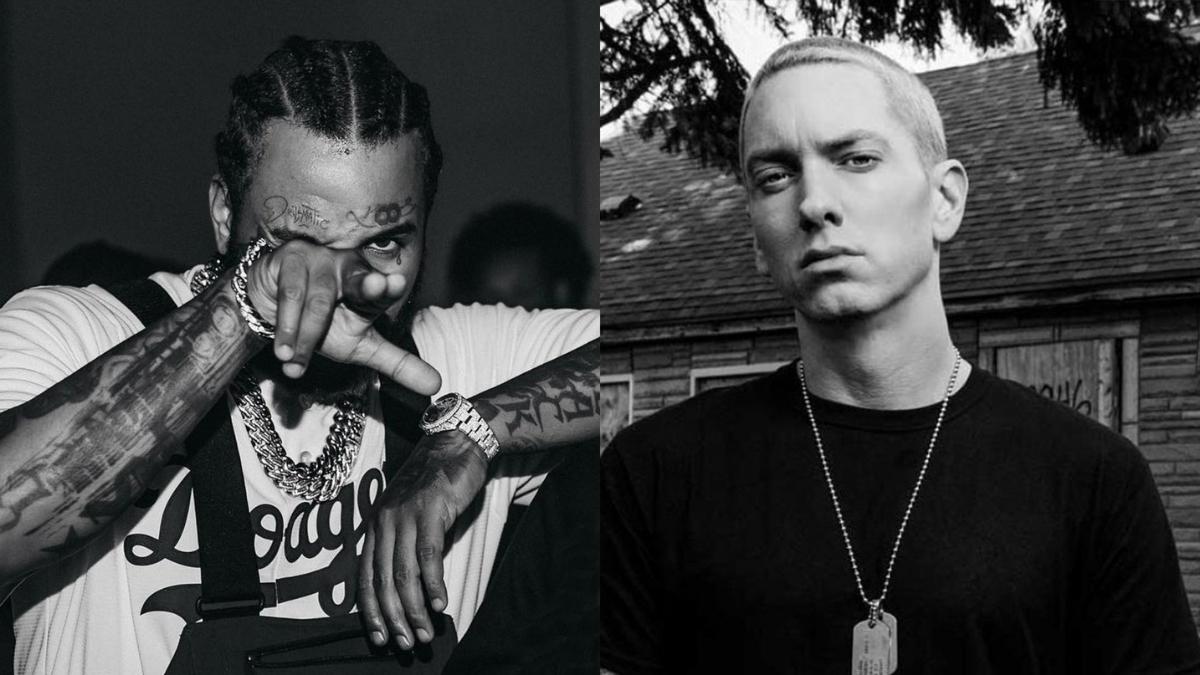 In “The Black Slim Shady”, The Game takes on rapper Eminem in an aggressive diss track.

The over 10-minute tongue lashing comes from Drillmatic: Heart Vs. The Mind, the new album of the Compton rapper. The skit opens with an Uber driver, who has been tasked with carrying Game to an unknown location in Detroit, although it’s “somewhere near 8 Mile”.

As the skit develops, The Game uncovers that the driver is the brother of Stan, the fictional diehard Eminem fan who dies in Em’s song “Stan” from the 2000’s.

The Game says, “Hey yo, I really fuck with that Starter cap; that shit hard as fuck.” The driver then says: “Crazy story behind it. My brother Stan, rest in peace, he gave me this hat 22 years ago. It’s my favorite.”

In response, Game asks for a look at the hat, which he sees is signed by Eminem. “He used to be like this rap god, but that’s when I was little. I don’t really like his new stuff”, the driver responds.

Listen to “The Black Slim Shady” lyrics on Youtube below:

Game continues to take shots at nearly every aspect of Eminem’s life. From his white skin and addiction struggles to his ex-wife Kim Mathers and daughter Hailie.

Lyrics From “The Black Slim Shady”

He raps, “Ask Dre, all I got is my word, my dick and my MAC-10”. “One thing you can never have is my muthafuckin’ Black, skin. This ain’t no suit that I wore, this ain’t a mansion to hang a plaque, this ain’t no stupid award.”

As Game continues, he adopts the cadence of Eminem’s Oscar-winning hit “Lose Yourself”: “So oh, he goes platinum and oh, I’m on the ‘Math with him. He got all the Blackest friends, he wants to be African, me. Left for dead on the Doctor’s Advocate. Dre never executive produced it, I just imagined it.” He later proclaims Big Sean is Detroit’s biggest rapper, and he prefers “Snitch9ne” to Slim Shady every time.

He continues, “You’re a Karen, call the cops”. “Tell ’em there’s a Black man with a Glock and he’s got a cock/ And the tattoos on his face is a star and a teardrop […] I know you fiendin’ for a Dr. Dre base hit/ How ironic, an addict in a basement. You never understood ebonics or a cadence.”

Nothing Is Off Limits For The Game

The Compton native mentions Mariah Carey‘s alleged six-month relationship with Eminem, as well as her ex-husband Nick Cannon and 50 Cent.

The Game spits, “But since Curtis always do, let him write the rhymes for you”. “Tell him to clip the wings on my butterfly tatt’ and force ’em back in the cocoon/ Now does he still rap or did he have a change of heart too? The chick on the show wasn’t pickin’ me and Mariah wasn’t pickin’ you. So the cannons is blam-blammin’ and if it jam then I unjam it. And wipe down my stripper pole with the hair grease from your bandana.”

The “Black Slim Shady” ends with The Game confessing to kidnapping Stan’s brother to carry out a hit on Eminem, but he ends with: “Your fans want a Rap God/ Well fuck it, I’ma give ’em one/ I came to put Slim in a box, but he already live in one.”

All DSPs will begin to offer Drillmatic: Heart Vs. The Mind at midnight on Friday (August 12). See all of “The Black Slim Shady” Lyrics below:

In this article:50 Cent, Big Sean, Eminem, mariah-carey, nick-cannon, The Game
Up Next: