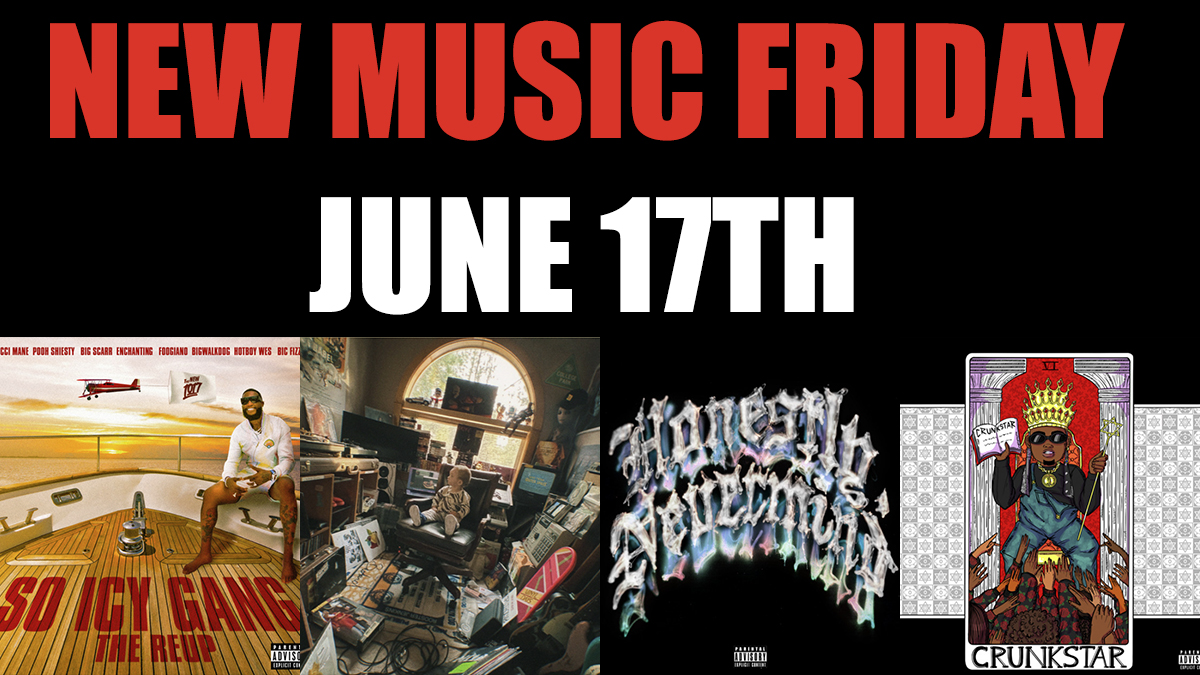 Drake announced his new album dropped at midnight and we’ve already seen the excitement around the world!  New Music Friday is all about “Honestly, Nevermind” this week! This is the seventh album Drake has given us but this isn’t the only exciting thing we have lined up!

Duke Deuce hits us with his latest album CRUNKSTAR and let’s not forget Logic’s Vinyl Days!  Both are worth tapping into!  1017 Records Boss Gucci Mane drops The Re-Up with So Icy Gang and also showing up for us is Kevin Gates with his album “Khaza.”  Westside Boogie drops his MORE BLACK SUPERHEROES and Erica’s Banks graces us with Diary of the Flow Queen!

All the best new albums from Hip Hop and R&B From Friday June 17th!

Ever since Drake has been moving through the industry, he hasn’t stopped delivering!  Recently when the Toronto rapper dropped his Scary Hours 2 in 2021, we see that he’s around to surprise us.

And to honor this, Drizzy announces yesterday that he released Honestly, Nevermind, a 14-track album that will have his fans glad they started following him in the first place!  Honestly, Nevermind comes to us just in time for summer and less than a year after Certified Lover Boy, where he took home a Billboard No. 1 last September!

Upcoming we hear that Juicy J and Pi’erre Bourne may be teaming up.  And even more exciting, Duke Deuce is bringing back some of the styles of our “crunk boys,” Three 6 Mafia!  The Memphis star’s

CRUNKSTAR came to us today with plenty of tracks to be played in the club for a hype night!  Deuce has plenty Featured on the project.  Included in the lineup are the artists Lil Yachty, Babyface Ray, Doe Boy and more!

I don’t think fans have ever seen a longer track list than Logic’s Vinyl Days. The album consists of 30 songs along with so many features.  This lengthy debut will include features from Action Bronson, RZA, Royce da 5’9″, Blu & Exile, The Game and many more.

Along with it being his longest album, Vinyl Days is also Logic’s first album of 2022 and has pulled the rapper out of retirement!

Gucci Mane reminds us of his role in A&R with his 1017 lineup.  Including artists like Pooh Shiesty, Foogiano and Big Scarr, Gucci Mane is ready to still bring his “A Game” to rap music!

He proved this to us by dropping So Icy Gang: The ReUp, showcasing himself and a lot of the newcomers that are moving through the industry.

You know it’s real when you have the privilege to hear some Kevin Gates!  The soulful rapper has created his own lane in Hip Hop, providing melodic raps and showing his passion in every track.  Gates has taken to TikTok and gained newer fans who enjoy his older work.  Some of his classic tracks, such as “Thinking With My Dick” featuring Juicy J and “Really Really” have allowed the Hip Hop sensation to continue his legacy.

To continue to give his fans more, Kevin Gates brings us his album Khaza.  Tap into that and his Big Lyfe Tour this summer!

Westside Boogie, having released “Oh My” in 2015, “Came Up” in ’17 and “Everything For Sale” in ‘19, gives us yet another energetic album with MORE BLACK SUPERHEROES.

With the two lead singles “STUCK” and “AIGHT” as must-listens!  These two tracks along with the rest of the album will give fans Boogies interpretation of modern Los Angeles Hip Hop.

SoFaygo has quite the list for himself this week!  From being included on XXL Magazine’s 2022 Freshman Class to now giving his fans his EP B4PINK.

Having a very similar style to SSGKobe, and the late XXXTENTACION and Juice WRLD, SoFaygo’s has built himself quite a following!  Even though B4PINK is not a full album, SoFaygo continues giving his fans what they want, growing each year.

Don’t forget this week’s Honorable Mentions and stream Erica Banks’ Diary of The Flow Queen and Let Her Hold it While you Pee by Chris Crack.

Let’s see what next New Music Friday has to bring!

In this article:Drake, Gucci Mane, New Music, New Music Friday
Up Next: