The hysterical moment occurred in the third quarter during a blowout against the Philadelphia 76ers. The hip-hop star got up to snag a ball that went out of bounds.

Along with giving Coach Spoelstra a nice massage, he pumped up the fans at FTX Arena by clapping and cheering.

Back in the 2019 playoffs, Drake did the same thing to Toronto Raptors head coach Nick Nurse. Drake calmed the Raptors coach down after Fred VanVleet’s three-pointer.

Back when Drake did that, the NBA had a talk with the Raptors about Drake’s actions. Nothing serious came from the situation, but DJ Khaled may want to be wary.

Eric Spoelstra was all over the gesture DJ Khaled gave him. Eric thought it was funny, and he was happy to see the DJ getting the crowd fired up.

The coach was very humbled to be part of that moment. He said that DJ Khaled has been a loyal and great fan.

Finally, the Miami Heat took a 3-2 series lead, and DJ Khaled seemed to bring them some luck.

Newsletter Signup
In this article:DJ Khaled, Miami Heat, NBA
Up Next: 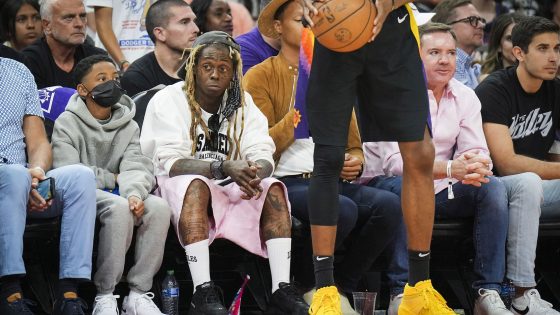