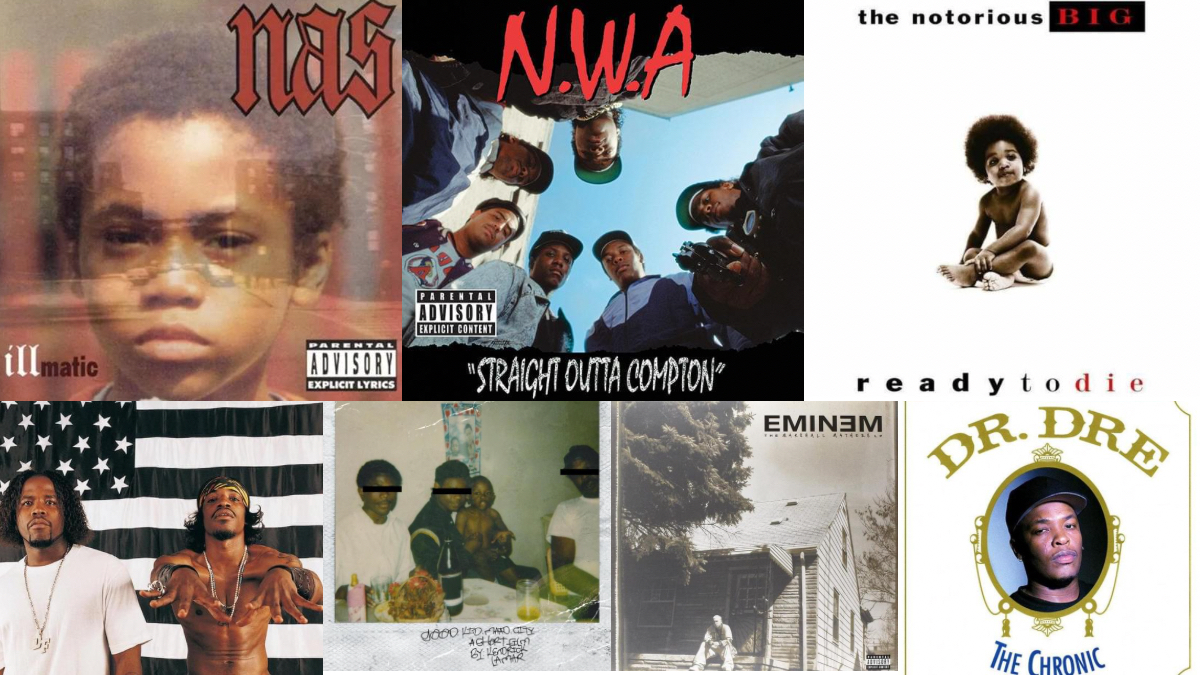 Since the inception of the hip hop genre, countless legends have brought their own unique touch to the widely loved genre. While sitting down to put together the 10 best hip hop albums of all time, hard choices had to be made.

Dissecting a genre so uniquely rich in history and culture, we focused not only on sound, but influence as well. As we dug and listened to some of hip hops most historic works of art, we found ourselves appreciating the, ”golden age”, which paved the way for the artists we know and love today.

One of the most beautiful things about the hip hop genre, is it evolves and expands at a pace no other genre in music can keep up with. It became very clear to us while listening to these albums the influence they have had on modern legends in hip hop such as Drake, Lil Wayne, Kanye West and more.

With a unique intensity and rawness, Nas carried the East coast hip-hop fire in the same way as Wu-Tang Clan before him. Nas released his debut album, Illmatic, at just 20 years old, and it spent over 20 weeks on the charts. The album earned him a coveted spot in fans’ hearts and critics’ praise everywhere. Nas never feared pushing the limits of his lyrics in his music. Throughout Illmatic, themes of gang violence, drug use, and inner-city struggles are explored. With his signature poise and eloquence, the young rapper confronts these realities. It was a fiery debut for Nas.

This album’s production is one of its defining features. This album was largely influenced by Wu-Tang Clan member RZA, who contributed not just bars but beats as well. Due to the limited budget of the production, the nine-member hip hop group had to record in a small space. However, RZA managed to make the best of the situation. With a combination of diverse samples from soul music and martial arts movies, RZA and the Wu-Tang Clan get extremely creative and innovative.

The influence of this album can be seen in rap in subsequent decades. Using unique and hard-hitting samples, Enter The Wu-Tang raised the bar for what beats could be. Furthermore, Wu-Tang Clan is a nine-member group, which makes this classic extremely impressive.

Rapper The Notorious B.I.G., whose real name was Christopher Wallace, is an instantly recognizable name in pop culture. A true masterpiece of his genre, Ready to Die, was Biggie’s only album released before his untimely death. Eventually, the album reached quadruple platinum status.

As a rapper who is completely and unabashedly himself, Biggie firmly established himself in rap history with notably simple, but hard-hitting lyrics. Using harsh and brutal realism, he paints a picture of his life in his one completed album. As fate would have it, the album’s title foreshadowed Biggie’s tragic demise only three years after its release.

Although East Coast and West Coast fans might argue about a lot, 2Pac is one of the greatest rappers of all time, and this album is a masterpiece. In exchange for signing to Suge Knight’s label, Tupac Shakur was bailed out of jail. Shortly after, he released the iconic album. In exchange for that deal, Pac’s most beloved album to date was created, with tracks such as “California Love.” A celebration of the gangster lifestyle, featuring a swagger that mumble rappers today fail to capture.

5. It Takes a Nation of Millions to Hold Us Back – Public Enemy

With its political rage and searing social commentary, Public Enemy‘s second release, It Takes A Nation Of Millions To Hold Us Back, is one of hip-hop’s most influential albums. This album was recorded in six weeks, containing in an innovative and arresting sound by layering samples. However, when you take a moment to appreciate the lyrical prowess exhibited by the group’s lead rapper, Chuck D, it’s made all the more impressive. Public Enemy’s It Takes A Nation is as galvanising as it was when it first dropped, bringing a punk sensibility to themes of black empowerment and social injustice.

Known for pioneering the West coast hip-hop sound, Dr. Dre’s 1992 album The Chronic captures the sound of his era. A revolution in hip-hop was introduced with Dre’s first solo effort – G-Funk. For years to come, Dre’s beats would define what West coast hip-hop would be based on synthesizers, heavy bass, and funk-inspired samples.

In addition to mentoring and shaping several notable figures in the game, Dre was a rap pioneer from the start. Among his protégés are Eminem and Snoop Dogg. Two of the most recognized names in all of music let alone hip-hop. Dr. Dre was a visionary and creative genius who challenged the boundaries of rap from the very beginning.

Among the founding groups of 90s gangsta rap, NWA holds a special place in music history. Known for their social commentary on police brutality, their Compton roots, and generally not caring, Straight Outta Compton was the group’s first album. The street knowledge portrayed in this work was genuine and brazen. While people were still afraid to stand up for social justice, NWA stood up for it and highlighted the ugliness of the system.

As the new millennium dawned, Outkast had become the standard bearers for Southern hip-hop, which was unfairly sneered at as being lazier than rap’s coastal forms. In a region filled with so many forms of music, Stankonia finds harmony in a plethora of music genres. It is particularly noteworthy that André 3000 and Big Boi, two of the best rap artists of their generation. They encompass the stylistic patchwork with panache especially on their respective hits “Ms. Jackson” and “B.O.B.”. With hot-button topics such as sex, abortion, and hypocrisy in American politics, the “blue collar scholars” sound is legendary. This album is wildly recognized as one of the all time greats.

Eminem remains one of the greatest rappers of our generation, and few in todays day and age can compete with his body of work. Potentially his most notable albums, The Marshal Mathers LP, which captures his signature style of brutal honesty and fury. Critics and the problems caused by fame are continually attacked on this album. Even before social media, The Marshal Mathers LP sold nearly 2 million copies in its first week alone with hits like “The Real Slim Shady” and “Stan.”

A chart-soaring platinum album like good kid, m.A.A.d city proved that Kendrick Lamar’s formula was still intact as an independent artist. As far as themes, guests, and Kendrick Lamar’s sound are concerned, it was flawless. In any case, the focus, refinement, and brilliant execution of the concept were refined. Whether it’s because the MC had matured artistically or because he lived in an enhanced world. The release of good kid… seemed like a debut for Kendrick. However, he had two acclaimed albums already under his belt (and singles that charted).

A detailed world of circumstances had emerged for the 24-year-old, who returned to his childhood, family dynamics, and Hub City. In “The Art Of Peer Pressure,” adolescents doing bad things at high stakes were the subject of a charged ride-along. The juxtaposition of “Good Kid” and “m.A.A.d city” showed us a highly observant and “chosen” prodigy living in a world of street gangs, drugs, and survival. Kendrick Lamar’s good kid, m.A.A.d city captures his essence perfectly and opened a passage for fans to truly understand who he is.

Let us know what you think! Do you agree with our 10 best hip hop albums of all time? Head over to the Hip Hop Today Instagram and leave a comment to discuss.